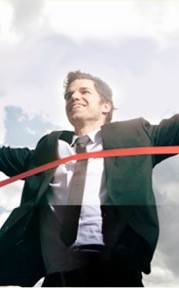 I am aware that Startup is always compared with Marathon and since I experienced both first hand, it is worth sharing it.

Last year I wanted to run half marathon, 21k! I couldn't and hence I did 6K. No I did not run out of breath but I ruptured muscle around the knee during training & bowed out!

I am 53 and I was training on my own for it for four months and was very confident that I can make it. Post couple of months of training (taking instruction form internet and some Gym friends), I was running 5K almost every day and on weekend a 10K. As the date of Delhi marathon was coming near, I was increasing my speed and the distance almost everyday and then one day I felt that I have some stiffness in my muscles surrounding the knee. So I stretched little more than average, which gave me some relief. However as the D-day approached, I was feeling more & higher discomfort as I kept running despite of pain. So I gave it a full one week rest just before the event and obliviously felt better. I was feeling great on the race day and started running. At about 2K, I could feel the discomfort and I slowed down. It was long way to go! I sprayed the pain killer and kept running. At 4K I knew it was impossible to go all the way as the pain became unbearable. I barely managed to finish 6K. I was very disappointed with myself and was sulking on my way back. My right leg was in terrible shape and I could barely walk. However somewhere I was also happy that I had run a race after 35 years!

Yes, I used to run 1500 meters and 5000 meters in School! In 1978/79/80. After that, sparingly some jogging and nothing much for 36 years. So running in a race was quite a thing, except that I could have been better prepared for this “Ad-venture”. Now if you got the hint as to why am I telling this story? Yes I made the same mistakes that most startup make in their “Venture”. Got an idea, din't prepare for it, took no formal training in running or help from a coach, ‘I know it all approach’ and running it like a middle distance race that I used to run 36 years ago! Yes, I made all those mistakes that could have been avoided, like a startup and failed. So let me elaborate and analyze my mistake at the same time:

See You At A Marathon Called Startup!